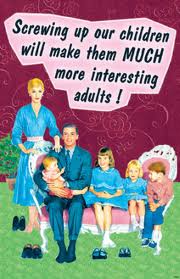 I think for the most part, most us are selective about whom we allow into our inner circles. The transparency of my personal life is reserved only for the most trusted of friends and family. The ones whom you know have only your highest best good in mind. If someone oversteps your boundaries, shows disloyalty or becomes a nuisance you simply send them on their way. When step children come into your life, it can be a mixed blessing. The "mixed" part happens because children are automatically in the fold. They are by default, intimately aware of the comings and goings of your personal life. When the step-child comes with a malicious parent who uses them to pry into your life, the infiltrators are no so easily rid of. This can result in a straining of the relationship you have with your step-children.


Recently we discovered that every week my step children are returned to their mother, and promptly interrogated as to what went goes on during their time with us.  Cheerfully talking to your kids about what they did, where they went and did they have fun would be perfectly normal. That line of questioning sends a healthy message that you hope they are having a good time and you want to hear all about it, right?


Recently my step-daughter let it slip that the first question the children are being asked upon returning home is “so, did anything bad happen?”  That line of question sends a not so healthy message to an already torn child who now thinks, “Am I in some kind of danger?” I mean, we had already surmised that the kids were being questioned about our personal relationship and life together. We chose not to press the children about it ourselves because we knew they were already being “pressed” enough by the Ex.


At least pre-custody hearing, her motives were obvious. She wanted to control the children with fear, and slander DD with a variety of mental disorders that only a qualified insurance adjuster like herself could diagnose. All in the hopes of gaining full custody and a handsome support payment. But mostly, I suspect it was because she was just plain pissed about getting turfed out on her ass for cheating, and he was going to pay. Hell hath no fury and all. But why, after she lost her case and custody was settled couldn't she just let it go? I won’t even get into the kind of anxiety attacks that would afflict my step daughter on occasions where her mother dropped her off personally. Let’s just say it took months of deprogramming for the crying, shaking and hyperventilating to stop. Oddly, she seemed perfectly happy on days she was picked up by one of us at school or from friends. Was it all a performance? Who knows? But happily Jube has now fully returned to a normal, nosey, spastic, constantly bugging her brother and totally bored all the time 10 year old state of being.


2 years have passed since the separation and the kids are figuring it out.  Little by little, bits of information are creeping out of them that previously they would have been afraid to tell. As more and more the children confide in us, the more I have begun to feel that there is an intruder in my life. Not like an unwanted house guest who has overstayed their welcome, but infiltrator who can attain very private details of my life and will happily use it as fuel to gossip and undermined me.


I remember once, early in my relationship that I’d had a “client” in my salon. This client had obviously booked her appointment with me on behalf of EE for a little interrogation session. She made one comment that stuck with me. “This is a small town you know. It’s a good thing because it keeps you in check”


And I thought “And just who the fuck do I need to check with?”  This is just one of the reasons I don’t live in a commune.
At times my life feels a bit like I'm a character on a reality show. There are cameras you know about, and some that are hidden. With kids you never know what little spat over chores or very personal discussion about money or future plans they have overheard. And what about bedroom noises?! On a reality show, there is an audience to satiate and a cast who is compensated in some way. In my life, it’s not an audience; it’s more like a beast. The beast needs to be satiated and the children know it. (They are astute you know) They know mommy loves juicy personal and especially negative morsels to fuel her thirst for drama. I know there are times their version of events get a little glorified for the sake of ratings.
And so I am left to wonder… How do you keep from feeling resentful of the children when the Ex deploys them as her henchmen? And when a parent creates an atmosphere of alienation towards the other household, how do you minimise collateral damage?
I would like to have an open and loving relationship with my step-children. I know that out of fear and loyalty, they would throw me or DD under the bus in a heartbeat to satisfy their mother’s stalker-ish obsession. So when my shields are up, and I am on high alert its the children who will feel my guardedness and not the love they deserve.
Posted by Manifestation mama at 11:45