So my super cutie-pie Dream-DILF love- O-my life is a bit of a pack rat.


Not quite A & E Buried Alive status, but there are moments when I question the potential of that. Are we just one mild head injury from hoarders?


I am not an overly obsessive neat freak, nor am I the most organised person in the world.  That, in fact adds to my concern.  If, even I am overwhelmed with the clutter, could this be potentially serious?


I went on a campaign a couple of weeks ago to clear out the garage. DD has a habit of piling heavy and dangerous items on top of light and unstable items. (The other day I went to grab an empty cooler from high atop a pile of rubber maid bins and the cast iron Xmas tree stand he had so delicately set on top nearly took me out) The very decision to take on the garage is a death defying endeavour. I endeavoured to proceed with caution.


Lo and behold under the rubble somewhere between Xmas lights and linens, I came across some boxes. Boxes that I was sure were supposed to have been returned to the one who shall only be referred to as “Evil Ex”. I shuttered. I should have walked out right then and there. Regrettably my lower self-saboteur got the better of me and I peeked. Fuck.


Right on top of the very first box I open were (you guessed it) two large volumes of my beloved DILF and the Evil Ex’s wedding photos. Why?? Why do we let our glutton for punishment-self-defeating curiosity get the better of us? Prior to the move and post division of asset I distinctly and succinctly stated that I did not want any remnant of the former wife in our new home. Moving into the home that DD shared with her was creepy enough.  On one occasion, I had come across a pair of black polka dot G-string panties whilst cleaning under the bed. Barf.


I almost packed up right then and there and went back to my high rise apartment.


And so after several melt downs and an attempted mutiny I was confident that I had assured myself safe and clear passage into our new home together sans Evil Ex.  How these boxes got past me during the move is stupefying. Now, there were some boxes with quite entertaining contents I must say. For example there was an entire box of EE’s high school annuals from the 1980’s. There was an entire photo album cover to cover of EE in 1980s style vanity shots. She had gigantic bangs and the photos had been taken with a soft light filter. The pout-y faces she was making I can only liken to that of a Madonna-wanna-be porn star. It was hilarious.  I am sure that had the contents of all the boxes been similar, or grandmas silverware I would not have been so upset. But it was the wedding photos that got to me. There are things that you just can’t un-see. Once your eyes have seen something so disturbing, it is burned into your brain forever .

The next few hours were a blur. I do know that they involved some strongly worded text messages that resulted in the immediate arrival of my beloved home from work in the middle of the afternoon. I also recall that there was debris strewn down the driveway and onto the street. By debris I mean boxes and photo albums. (DD disposed of them immediately, thankfully) I don’t know how on earth the debris got all the way onto the street, but oh well. C'est la vie. This incident just illustrates my earlier point (see blog: “your place or mine”) regarding the co-habitation of the crime scene. 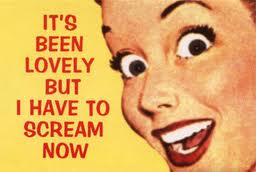 Posted by Manifestation mama at 10:50