I know you have all been enjoying tales of the Evil Ex. You may have found yourself morbidly spellbound as if you were watching a trainwreck as I have described some of her most crowning moments in parenting. Labour Day weekend actually marks the anniversary of one of Evil Ex’s most glorious moments in vengeance that resulted in a demonstration of horrific parenting; I thought I would commemorate the events, which are featured below. Here is my top ten list of how to ensure your child’s university tuition will be spent on therapy instead.


Last weekend the children should have been returned to us on Friday night. On Friday, we discovered that EE had no intention of getting themback.  Therefor our plans to go to Whistler for the long weekend were kyboshed yet again. I was inspired to write this after it was discovered that EE had told the children that we didn’t see them on the weekend because he was too “lazy” to drive the 2 hours back to city and get them on Sunday am.  (and by “Lazy”she means,” refusing to give in to her and her self-serving manipulationt actics)


DDILF’s pick up day atschool was yesterday and low, who do you think had decided to show up? It seemed that Evil Ex was running another slander campaign in light of our unwillingness to drive back to the city. I do admire her “do it to them before they do it to you” strategy. She must have studied “The Art of War”.  It was blatantly apparent that her mission was to make DDILF look like a jerk. Not only was she commenting to other moms, but also to the children and their friends: “I wasn’t sure he would show up to school pick up, that’s why I am here you know.” I am impressed by her nerve and tenacity, but clearly she missed her calling as a B rated porn actress because that’s about how convincing she is. So here we go; my top 10 ten list for “How to ensure your children’s university tuition gets spent on therapy, because you screwed them up so beautifully”.


1)     Tell your children their father is sick in the head. Right after you separate, tell your children repeatedly for months on end“Daddy has something wrong with his head and needs to see a doctor” [and by“wrong with his head” you mean, he didn’t believe you when you denied repeatedlysleeping with another man in his bed, even though the video he installed confessed it all]


2)     Stop letting your kids see their father completely (because he is sick needs to see a doctor, or god forbid they mightfind out that you are the sicko) If you see that your husband has come toschool to see his kids, quickly call 911 and scare the kids into the car by saying: “Daddy’s gone CRAZY”. Then cry assault and have him arrested. Make sure you do this right in front of the kids and the entire school… [don’t attemptthis if you see he has a cell phone camera and can quickly discredit all claim,leaving you looking like a complete asshole]


3)     When your lawyer finally tells you that you have to let your husband see the kids, and you do; get all liquored-up and show up at the house at midnight; waking up yoursleeping kids by screaming  “I’m going tokick you in the neck!” and pound incessantly on the door. Then be grateful thatunlike you, calling the police and having their mother arrested is not one of those touching childhood events he wants his kids to experience.


4)     Have your brother-in-law try to punch out your husband when he comes to the house to see his kids. Again, ensure the kids arew atching this, but that there is no camera phone recording. (We don’t want to embarrass our feeble brother-in-law as he completely fails connect a single throw)


5)     When it serves you, use him as a backup babysitter. When you are in need of some cougar time, but you have worn out your favour with relatives, randomly show up on the doorstep of your husband’shouse.  Be nonchalant as hell, and act asthough you are giving him the awesome privilege of seeing his kids. Just don’tbe surprised when your child has a complete meltdown. Maybe she is wondering why her mother would leave her with an apparent crazy person so she can go party.


6)     Make a scene; every chance you get. When husband chooses to accept the unpaid babysitting because he is just grateful to see hiskids, randomly try to start a fight with him.


If he does not want to get into a fight in front of the kids, just start yelling at him about his new girlfriend. When your husband asks you nicely to leave,and tries to close the door… throw yourself on it, beat on it, kick it,shoulder check it and try to force your way back in; when that fails and the door is firmly closed and locked with your face behind it… scream at the top ofyour lungs: “don’t touch me! Don’t push me!” and make a huge and overly dramatic scene and then go to the police.


7)     Make your 7 year old lie and get his father arrested. When you’re really mad because your husband won’t acknowledge  your existence and you’re attempts to pick a fight make you look like an ass. Just take your 7 year old down to the police station and make him tell the police aversion of number 6 that ultimately gets his dad arrested. 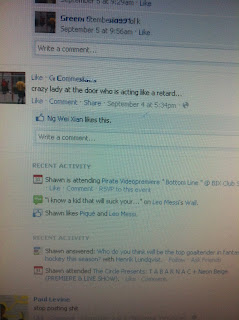 [I actually love this one, because my son was home for one of theseawesome events and posted this comment on his Facebook status.


I didn’t love when the police showed up the next day to haul my DILF offto jail for 4 hours. Thankfully "crazy" is easily detectable by trained police officers. They and the neighbours all agreed that EE was in fact nuts, and he was released with no charges.]

8)     Attempt to run him over while your children are in your car. I have nothing to add to that.

9)     Add Drama wherever you can. When you are sendingyour kids off to go to their Dad, pour on some drama. Say things like “Its OK,everything is going to fine. You have to go. You have to go, but you can callme and make sure you do. You better call me; if anything happens I will come and get you OK?” Make sure you keep it up until you can see that your daughter is starting show signs of trauma (shaking,crying hyperventilating) then wave and look sad and desperate. This only works for a while, because eventually they realise, that in fact, everything is OK.

10)  And finally, make sure your kids think that their Dad is just a loser, a cheater, a beater, a crazy and plain old doesn’t love them. There is nothing better for a child’s self-esteem than the knowledge that something is inherently wrong with one or more of their parents. Children are extensions of their parents, if something is wrong with a parent, there must be something wrong with them.  And that’s good, because you get to swoop in on your broomstick and be the big winner… because you are the only one who matters afterall.

Posted by Manifestation mama at 15:53